After 9 consecutive years of hard work, we're taking a vacation. We will be closed from August 1st to August 8th.
We will be closed on July 4th.
In accordance with the recent arrangements regarding COVID-19, we are remaining open for:


A Full Menu is available everyday from 12:00 PM to 9:00 PM
for your enjoyment as we safely navigate through this time.

Have questions? Drop us a line below and we'll get right back to you!

Taking a chance on a dream

Published May 30th, 2011 by the Clifton Journal
By Tony Gicas, Staff Writer

CLIFTON – It’s an entrepreneurial tale of dishrags to riches, of a busboy becoming a businessman. Matthew Tyahla’s career in the food service industry began humbly at La Finestra, an Italian restaurant located a stone’s throw from his home on Vincem Drive.

After repeatedly bugging the restaurant’s owner to see if he was hiring, Tyahla finally got his way and, at 14 years old, landed his first job serving as a food-runner and busboy on the weekends.

“I fell in love with the business from day one,” he said. 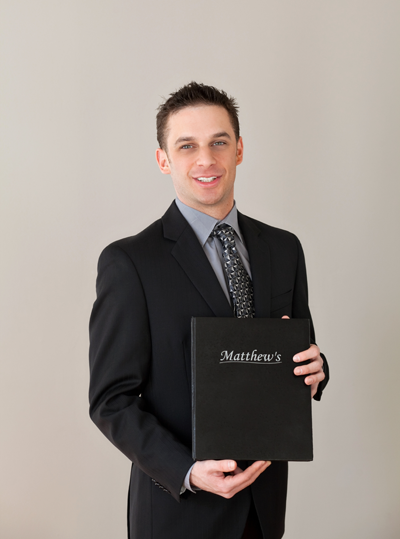 Tvahla stayed at the restaurant for the next two years until it closed in 2000. His job search did not last long and he began again as a food-runner at the Bloomfield Avenue establishment Bella Napoli which later became Cafe d’ Amici.

After becoming a busboy, Tvahla later joined the waitstaff, working diligently through high school and college up until the last table cleared when Cafe d’ Amici dosed last August.

Through good and bad times, his co-workers said the enterprising Clifton native remained a reliable stalwart for staff and customers to lean on. Amy Barklow, 34, worked with Tvahla for several years and was an experienced waitress when he first began working at the restaurant as a teenager.

“Now Matt is like a little brother to me, but he’s also always been mature beyond his years,” Barklow said. “An old soul in a young kid.”

With a decade spent at the eatery, Tyahla had not only learned the restaurant business from the inside out but was also armed with a degree in business communications from Ramapo College.

Although just 26 years old, Tyahla said he had been saving up his money since he was 5 years old and saw the closure of Cafe d’ Amici as a potential once-in-a-lifetime break.

“I’d been waiting a long time for an opportunity to come along and when it did I put everything on the line,” he said. “I reacted very quickly [because] my dream always was to have a restaurant of my own.”

While aware of the risk and challenges which punctuated the decision, Tyahla did not seek financial backing from family or friends and instead sought to acquire the restaurant himself.

He said the restaurant’s future lay entirely on his shoulders and, as its sole owner, so did the risk.

Over the next 100 days Tyahla sifted through a seemingly endless collection of permits, applications, registrations, fees and contracts.

“There was a lot of work, which was at times a bit overwhelming, especially because the initial process was something that was never taught during my formal education,” Tyahla said. “I actually think the hardest part is when you officially sign and get on board because you have to pick out every single thing.”

From the type of salt and pepper shakers to the color of the dining room’s floor to the font style used on the menus, he was responsible for every aspect of the business.

Open seven days a week for lunch and dinner, the establishment serves up some of Tyahla’s favorites including seafood salad, stuffed artichoke, zuppa di clams, linguini marechiara as well as a filet mignon he says is “off the charts.”

Though she had left Cafe d’ Amici two years before it closed, Barklow said she gave Tyahla “a resounding yes” when he asked her to return as a waitress and bartender.

“I very much look forward to going to work now and I find that the atmosphere that we work in is professional and yet laid back and enjoyable,” she said, “Because he’s such a great person and we know what he expects, his age has never been a problem.”

Although skeptical Matthew’s would succeed so quickly, Barklow was not the least bit surprised to see her friend become a business owner.

“Matthew was always destined to be the owner of a restaurant,” Barklow said. “In fact I would often encourage him to look into it when he was on the waitstaff.”

Ciiftonite John Resciniti, one of Tyahla’s closest friends since childhood, also said he was initially concerned about his friend’s decision but has since come away “totally impressed” by the restaurant’s success and quality.

“He put everything on the line to do it and it’s doing great,” Resciniti said. “I can’t tell you one person I’ve sent there that hasn’t raved about it. I’m a real picky [eater] and I’m blunt but haven’t been able to find anything to complain about.”

Also hearing nothing but positive feedback from Matthew’s patrons Barklow said she can’t remember a time when anyone was happier than Tyahla is now.

It turns out she couldn’t have been more right. ”The past eight weeks have been the happiest eight weeks of my life,” Tyahla said. “It’s a dream that became a reality, I’m confident in this place, this location, the food and myself to make this work. I truly enjoy coming to work to the point where I don’t even think of this as work. It’s a true passion.”

Excellent service, menu and food. The owner was present and very hands on in the tradition of the fine Italian restaurants of old...
AMR - Urban Spoon Reviewer,
Easy place to become a regular and feel comfortable while eating a great meal.
John S. - Yelp,
Delicious menu with tons of options. The owner is very eager to please which is nice. He took very good care of us. The chocolate bread pudding is out of this world.
Danielle C. - Yelp!,
Now that we found Matthew's Italian Restaurant we will become regular customers.
Jim C. - Cedar Grove,
We had dinner last night at Matthew's and I can't say enough GREAT things...
Michael S. - Clifton via Yelp!,
The restaurant was given a cosmetic overhaul that hits the mark - clean, classy and understatedly elegant...
Jen F. - Bloomfield,
The service, the food and the attention to detail was exemplary.
Pasquale G. - Yelp!,
An amazing restaurant. Great service, excellent food.. Go, you WILL NOT regret it.
Franny G. - Howell,

Matthew’s offers a delicious, classic Italian cuisine served in a contemporary and friendly atmosphere. Join us for lunch, dinner, wine and cocktails. A full bar and fine wine list complement our menu.
More about us ›